Posted on January 10, 2015 by armsakimbobook

I need to interrupt my planned post on “F*ck the Flashbacks,” to process what healing means in a week that has had so much violence and loss. So much hatred. So much shock. So much terror. Like every week in too many places on this earth. Places that do not have the privilege of random attacks in the name of religion being an anomaly.

No – this week was in France. Paris. A symbol of civilization, Western variety. We who are privileged close our eyes and ears so much of the time to the everyday assault on people who are just trying to live their lives, raise their children, survive another day where tribe attacks tribe, sect attacks sect, brother attacks brother. We who are privileged think we are safe. Until suddenly…we are not. 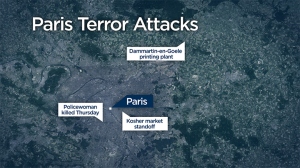 The attacks in Paris this week shook me to my core. I admit it. In part because it’s the unexpected. I felt the attack on free speech, freedom of expression, in the pit of my stomach. How could 12 people have died in a senseless act of rage and hatred because of some cartoons? I don’t feel like I’m “Charlie,” although I know I am a fervent (though not fanatical – I don’t use that word lightly any more) believer in these freedoms. I can’t feel like I’m “Ahmed,” because I’m not a Muslim protecting people who are attacking his God and being killed by religious zealots who believe they are avenging their mutual God.

It got more complicated yesterday, when a young woman police officer was gunned down while at a traffic stop by another religious zealot, in the name of his God.

Today, though, was the most complex day of the week for me. Today, Paris saw two hostage standoffs. One with the two killers of the Charlie Hebdo cartoonists, the two police officers, and others in the Charlie Hebdo offices. The other, in a kosher grocery store, where a number of Jews were going about their lives, readying themselves for Shabbat – for the peace and joy that it meant to them, not worrying that a fanatical man would barge in, kill four people, and hold 15 others hostage. That he would be tied to the brothers who had wreaked havoc in the lives of largely placid Parisians, trying to protect them by attacking Jews. I felt it as a Jew, among many other things.

My head is spinning. My heart is aching.

I have to mourn all that happened this week. I have to mourn the 37 Yemeni lives that were snuffed out on Wednesday, the same day as the Charlie Hebdo attack, outside a police academy. No – 38, including the suicide bomber. I mourn those lives I know about, and those I don’t. Those lives that were taken without us hearing about them. Because the attacks weren’t in Europe. Or Canada. Or the U.S. Or Australia.

What will happen in France now? In Europe? Will the xenophobes win the day? Will hardline right-wing zealotry take over, with Marine le Pen stoking the flames of fear in France, along with other conservative zealots in Europe?

We need to be better than that. We need not to give into fear. We need to soften our hearts, not harden them. I don’t know how. But if we don’t, this world will become an even more dangerous powder keg.

Right now, at this very moment in time, we need caring, not conflagration. Healing, not hatred. Love, not loathing.

I can but sigh.

I'm a mother, a lawyer, a feminist, a writer, a potter, and an inveterate and unapologetic New Yorker. My book, Arms Akimbo: A Journey of Healing, tells of my journey of healing over a number of years, learning to live a full life after I was molested by my father at a very young age. I live in Maynard, MA, with my wife and and our two moose-cats, Samson and Hercules. My daughter used to live with me part-time, but she's all grown up now and in her junior year of college, which I can't quite fathom, since she was born about five minutes ago...
View all posts by armsakimbobook →
This entry was posted in Grieving, Healing, Judaism and tagged Ahmed the cop, caring not conflagration, Charlie Hebdo, hardened heart, healing, healing not hatred, Jewish, Kosher supermarket, Love not loathing, Marine le Pen, sigh, suicide bomber, terrorism, xenophobia, Yemeni. Bookmark the permalink.