Are New Yorkers A Bunch Of Rude Idiots Who Need Schooling?

Fun piece about the joys of NYC commuting. Check out the woman who frosts a cake on the 3 train!

I have a super long commute. Sometimes, when the Long Island Rail Road and New York subway systems are off kilter, my round trip takes upwards of 5 hours. I’m traveling with as many as 8 million rail commuters, and sometimes the crowded system looks like it. But early this year, the MTA launched a campaign that is cute, laughable and maybe even derisive of the New York sensibilities. One might say, the campaign suggests we’re all a bunch of rude, insensitive idiots and it is up to the MTA to school us!

The subways are subject to the same human habits and attitudes that make NYC unique. I was amused when I saw my first sign in the campaign. 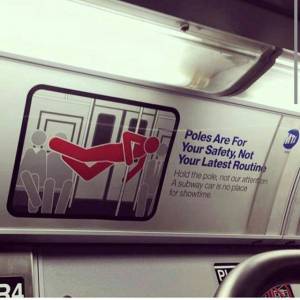 The advisory was aimed at trying to stop this:

And then there are performances such as these:

So in a sense, advising people not to perform on the poles on…

I'm a mother, a lawyer, a feminist, a writer, a potter, and an inveterate and unapologetic New Yorker. My book, Arms Akimbo: A Journey of Healing, tells of my journey of healing over a number of years, learning to live a full life after I was molested by my father at a very young age. I live in Maynard, MA, with my wife and and our two moose-cats, Samson and Hercules. My daughter used to live with me part-time, but she's all grown up now and in her junior year of college, which I can't quite fathom, since she was born about five minutes ago...
View all posts by armsakimbobook →
This entry was posted in Uncategorized. Bookmark the permalink.